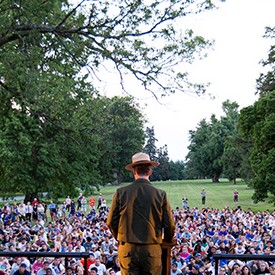 Gettysburg: A Touchstone of American History with Christopher Gwinn

Gettysburg is a special place and has been since the ground was made hallowed by soldiers nearly 160 years ago. Today, as America grapples with its history – especially its Civil War history – places like Gettysburg are critical to the understanding of who we are and where we are headed. Today’s guest is responsible for leading the effort to interpret that history. Christopher Gwinn is the Supervisory Park Ranger for the division of Interpretation and Education and is working hard to reach all Americans with the story of Gettysburg. Grab your knapsack and toss on your forage cap, we’re headed to the crossroads town of Gettysburg on this week’s PreserveCast.

Christopher Gwinn has served as the Supervisory Park Ranger for the division of Interpretation and Education at Gettysburg National Military Park since 2014. Gwinn previously served as an Interpretive Park Ranger at Gettysburg National Military Park. A 2006 graduate of Gettysburg College, he began working at Gettysburg as intern in 2003 and served the park in a variety of capacities. In addition to his service at Gettysburg, Gwinn, who holds a Master’s Degree in Public History, served in interpretation and education positions at a variety of parks over the past 11 years including Antietam National Battlefield, Boston National Historical Park, and the National Mall and Memorial Parks.